Just curious but what is Eisenberg's law? 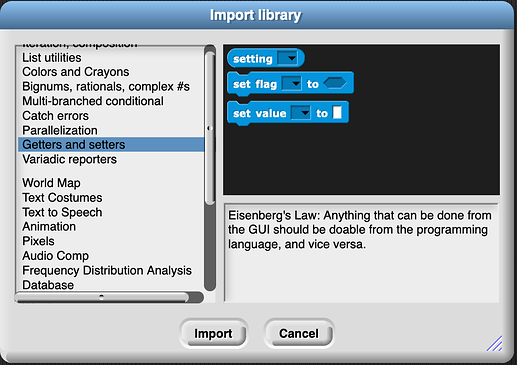 Eisenberg's Law: Anything that can be done from the GUI should be doable from the programming language, and vice versa.

I was curious when I first saw this but for some reason no relevant results were found for both "Eisenberg's law" or "Anything that can be done from the GUI..." on google. Can anyone point me to any quotes on this, or anything else that might explain this?

you can clone a sprite from the GUI(by right-clicking the sprite, and selecting "clone"), and you can from the programming language. (with the a new clone of [] blocks and the create clone of [] block) so, it follows einsberg's law.

Yeah, but I'm a bit more curious as to the origins of the phrase and whether some guy named "eisenberg" actually said that.

Mike Eisenberg, who was a CS professor at U of Colorado, Boulder until his untimely death (last year? the year before? these days it's hard to tell one year from another) is the source of that quotation. He said it in the context of his program SchemePaint, which was just like any paint program except that it had a Scheme interpreter built in, as an extension language. Every GUI element was implemented as a Scheme procedure, and you could write your own procedures based on those primitives. Conversely, you could add items to the menus, or add menus to the menu bar, or add buttons to the toolbar, etc.

Later, he was a pioneer of media computation. He got a 3D printer for his lab back when they had just been invented and cost a fortune; he wrote a program to do Origami, etc.

He was also a great, warm person.

(He of course didn't call it "Eisenberg's Law"; I gave it that name. But he did say it!)

Oh, cool! Thanks for the info

Seems like it would be a rather odd joke as they seem to have little in common.

Turns out I was wrong