Is there any way to scale / stretch a small costume without it getting blurry?

I want to scale a small, 16x16 costume up, however when i use the "set size" or "stretch" blocks they're blurry. is there a way around this?

In general, any small, bit-mapped image isn't going to look perfect if scaled up.

But if your initial image is a vector format, then it can look quite good when scaled up.

the thing is, i can't simply convert a bitmap image to vector; the image is wiped when i do that in the snap editor.

yeah, i can always do that. however i would still like a solution for changing the size of non-vector images, without blurriness, especially due to script-created costumes.

I don't think that is possible.
As @cymplecy said:

In general, any small, bit-mapped image isn't going to look perfect if scaled up. 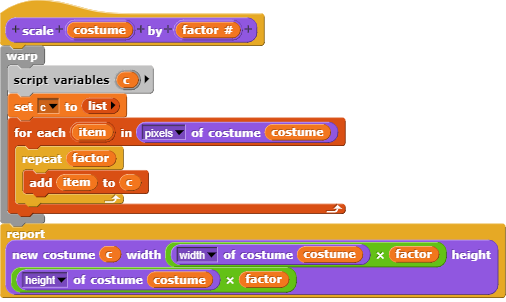 i thought of doing something like the image above, however...

it ends up weirdly stretched.

especially due to script-created costumes.

In this case, then it is possible

Below says "Stamp", but it also applies to stretch:

Pretty sure this is because of dithering -- the deliberate fuzzing of sharp edges to prevent jaggies when the edge isn't exactly vertical or horizontal. Jens says it can't be turned off; it's Javascript doing you a favor.

it ends up weirdly stretched.

Sure, you're repeating each pixel FACTOR times horizontally, but not vertically. 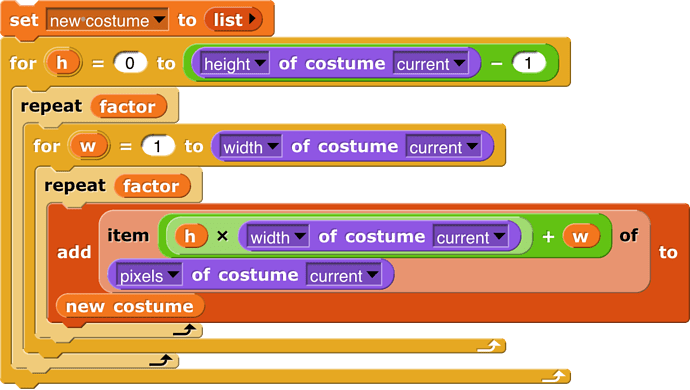 thanks! yeah, i knew i messed up with that at some point.

Taking Brian's basic algorithm, I've come up with this sped up version

soon™, I'll release the (stretch (costume) to (x) by (y) using [algorithm v]) for exactly this