Is it possible to store data without Variables between custom blocks

I know that the title does a bad job to describe what I want. Basically I want to be able to store data between custom blocks without using variables that are regularly accessible to users like a regular variable.
Kind of like the tempo value stored by the sound blocks.

Yes, but it's a little complicated. If you say 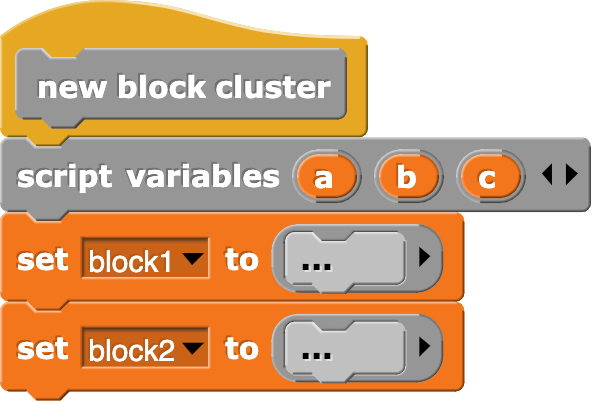 then BLOCK1 and BLOCK2 (which are global variables) have blocks as their values, so the rest of the project can say

The point of all this is that the script variables A, B, and C are persistent (they don't disappear when a procedure call finishes) and are shared between BLOCK1 and BLOCK2 but invisible to the rest of the program.

There's lots more about this in Chapter VIII of the Reference Manual.

Because when the block is called it runs as if it's in the original script which has the script variables?

Yes, procedures remember the environment in which they're defined.