I'm new to Snap!, but I have been on Scratch for a while. What's the difference (i know you can create custom blocks)?

i know you can create custom blocks

All ullities for custom blocks not just command blocks
also first class everything
(gang,dont tell him about js)

snap is pretty much identical 2 scratch. the differences? 1. on snap, there arent any loves, follows, stars, view counts, profile comments, project comments, or studios. the only place you can socialize is here in the forums. 2. the program. snaps looks more mature than scratchs. theres also more blocks here on snap that scratch doesnt have. sadly, you cant edit sounds (cri). unless you can. (plz any1 lmk if you can edit sounds.)

main differences: scratch is more of a social media, and has less blocks. think of snap as the older brother of scratch

oh, & btw, the snap forums is an upgrade compared 2 scratch! look at dis:

we have tons of emojis, rather than the boring 7 or 8 scratch allows.

Welcome to Snap!
The Reference manual (also accessible from the editor by clicking

in the top-left corner) has information about the features of Snap!

gang,dont tell him about js

Stop scaring me like that and stop replying to me when you mean to reply to the whole topic itself please.

What's the difference (i know you can create custom blocks)?

Nobody is telling you the most important difference! Look at this: 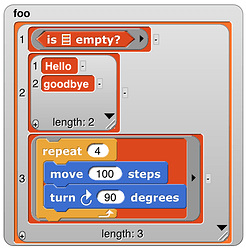 Google Chrome001680×690 63.4 KB
This is a list, sort of like lists in Scratch, but the first item is a block, the second is a list, and the third is a script. We believe that if something is in the language, you should be able to manipulate it as data: make it the value of a variable, put it in a list, use it as input to a block, and allow a reporter block to report it. Being able to use a block as input to another block lets us do things like this:

Here's a manifesto you can read about what we've done beyond what Scratch does:
https://snap.berkeley.edu/doc/Brian-Harvey_Baby-language.pdf

you should be able to manipulate it as data

you can actually cuss within reason here

and you can state opinions here

snap is not at all identical to scratch (quite literally, as in, snap does not share any source code with scratch). You can edit sounds using code (but it's harder). Snap is more powerful than scratch.

also, can you please stop abbreviating every word and misspelling words on purpose (there's spell check for a reason). It's kind of hard to read. it also sounds like your a baby.

idk y ppl hate text speech at all tbh, its just text. just so you know, youre not the only 1 who has complained abt my text preferances. multiple ppl have, especially on the scratch forums

srry if it annoys you!

First classness doesn't imply that you can look inside it. You can't look inside an integer! But what you can do with blocks is put them in lists, etc., and most importantly, CALL them.

You can't look inside an integer!

Right; an integer is very close to plain 0's and 1's. To look inside, I guess it would have to be able to see each binary digit... woah; a list of 0's and 1's can make an integer, and an integer can be in a list... (reminds me of the fact that a tent can fit inside of its tent bag and the bag can fit inside the tent)

It's all ones and zeros! A sprite is, too. The integer needs interpretation of the bits just as much as any other data type does.

Like that thing about walking through a piece of paper...

People get really confused, as you're pretending to be :~), by thinking about the hardware representation of a number as if it were a string of "0" and "1" characters. The right way to think about it is that what's inside the computer is a number, rather than a numeral. So when teachers talk about things like "converting decimal to binary" what they really mean is "converting a numeral (a string of digits) into a number." So you look at the numeral using blocks such as JOIN and LETTER OF, but you look at the number doing arithmetic operations.