How to Report a Certain Script as an XML?

(Continuation of How to Report a Project as an XML?)
How do I report the XML data of a certain script? I would like it to report it with the <script> tag.

How do I report a a certain script as an XML?

If you want to use it in Snap!, as your use of the word "report" suggests, then you don't want the XML at all. The script itself is first class data.

If you want to use it outside of Snap!, shift-right-click on it and choose "export script."

How do I report the XML data of a certain script?

Huh? I wasn't complaining about your vocabulary; I was just trying to say that if you want to use it inside Snap! there's no need to convert it to anything.

Well i want to make a back-pack-ing system, as an extension of my BETA Testing Collection.

Well, if the backpack is kept by Snap! (for example, as a hidden sprite, which is how I'd do it), then you don't want to think about XML. You want to think about objects the way users think about them, i.e., as scripts, as costumes, as custom blocks, etc. You might need a JS one-liner that does the equivalent of clicking "export" on an object.

Well I want to use the database lib to export it, for now im focusing on scripts instead of sprites, ill get to sprites later.

Here is the link if you want it, i dont think you understand.
https://snap.berkeley.edu/snap/snap.html#present:Username=joecooldoo&ProjectName=BETA%20Testing%20Blocks
The block i want is basically the kind I made in the Sensing catagory. "scripts as XML". I want to be able to report ONE script instead of the whole project.

i dont think you understand... I want to be able to report ONE script instead of the whole project.

If you want to use it outside of Snap!, shift-right-click on it and choose "export script."

Isn't that what you were asking for?

Did you try "export script"?

But if it's a backpack you want, then you want the things in the backpack to be objects, not unreadable text strings. For example, if you say 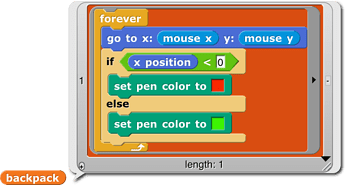 You can click file > open > browser > script name. But It needs to recognise that its a script only, by detecting the <script></script> tags.

You would probably say, "Well, you would still need to import the custom blocks." Well, the thing is, once you import them, and save them with the blocks I made, you no longer have to open the script via your file explorer. You can open it just as if you were opening a new project.

I know realize it can work without dragging.

you no longer have to open the script via your file explorer.

You declared an anonymous function inside another function, but you didn't run it. I think you should unwrap the inner function. The operator reporter already declares a function.