How to: make 0+ variable-arity argument; put text between args

What's problem you are encountering? 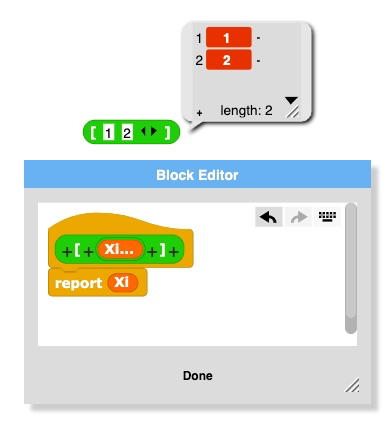 How do I allow for an empty list result?
Can I put some text between the 1 and 2 ?

Could you demonstrate how to?

Clarification: How do I make the block initially show up with zero placeholders instead of one?

Clarification: How do I make the block initially show up with zero placeholders instead of one?

There's no way to do that (even with xml hacking)

Wait, what are they talking about?

Wait, what are they talking about?

Like the "with inputs" of CALL, RUN and LAUNCH (oh and TELL and ASK) but the text being between inputs. (IIRC @bh wants this, too)

There are two different features under discussion here, and yes, I want both of them.

Jens isn't exactly against either of these; he just doesn't think they're as important as I do.

Good with both. Thanks!