On Windows 10. (I would prefer online, but I could use it offline.)

Offline is all there was. If you look at the bottom of the web site, there's a link to old BYOB files. No idea if it works in Win 10. Why would you want to use it, anyway? It's super slow and buggy. 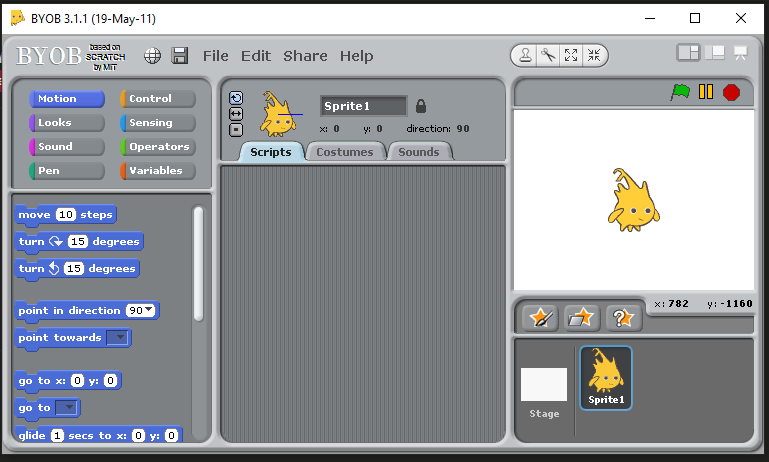 Can you send the link to BYOB

If you look at the bottom of the web site, there's a link to old BYOB files.

Do I need Scratch 1.4? Or is it standalone on Win 10? (It doesn't seem like it's standalone on Unix, so I just wanted to make sure.)

It's standalone on Windows.

Years ago, with Jen's help - I got it working on a Raspberry Pi
[edit Looking back at my emails from 2015 - it might have been Tim Rowledge (the person that worked on the Scratch 1.4 image for the Pi to speed it up) that helped me out - it was a long time ago

I think it might be It is the predecessor of single-stepping. (BYOB manual, page 35)

I think it might be the predecessor of single-stepping.

Yes. BYOB3 had a debugging interface that included single stepping and displaying intermediate values, looking a bit more like the usual IDE than what we have now does.

It's funny how accelerated the software timescale is; this all feels like ancient history to me, whereas, e.g., the Beatles and the Vietnam war still feel like yesterday.

Yeah. I was grounded from May 27th (this year) to May 31st (inclusive), but later it felt like a few months. And, in June, I was grounded again (I get grounded a lot) and I couldn't use internet, but it doesn't feel that long ago.

I get grounded a lot

I know I shouldn't ask, but this sort of remark makes me terribly curious...

Separately, I'm playing around with BYOB.

Not afaik, but those were before I joined the project. (It was originally just Jens!) I don't think those versions were ever really published; I had to email Jens to get my first copy of BYOB.