How do I take out text in items in lists?

So I'm making a C# Emulator, inspired by some emulators in Scratch (I have decided to talk about Scratch now and not be toxic about it) and, basically, there is a code list and a parser list.
So let's say the code list contains the following:

So if I split this up into parts by line with the parser list, how do I delete the // or Console.WriteLine(" or the '");' parts but still leave 'This is a test' and 'This is a test for Console dot WriteLine'?

Are we doing your homework?

The Strings library was written for just this sort of thing, in the context of scraping web pages. Check it out.

Are we doing your homework?

The Strings library was written for just this sort of thing, in the context of scraping web pages. Check it out.

What block could do this?

What block could do this?

The SUBSTRING OF ones.

Which block has the error in this code? 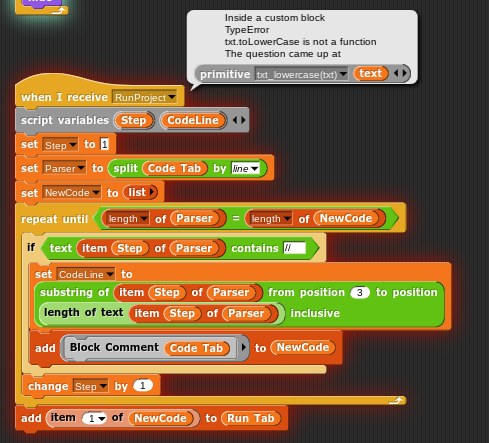 Probably Block Comment, wouldn't you say? The error message does say "inside a custom block."

There is nothing in the Block Comment though, just simply a custom block with a text input that does nothing...

Actually, let me show you the full code. That's all the code there is. (I'm not lying!)

Oh. Then I guess it has to be one of the library blocks. Find out which by setting breakpoints.

It's either TEXT CONTAINS or SUBSTRING OF.

Edit: It appears TO LOWERCASE doesn't work there. It works for me, though.

What happens if you do this instead of what you have?:

It should be, and for me is, this:

One fix is to sanitize the input in the library reporter

I've just worked out what happened

I did load the library in yesterday but this morning, I loaded an old custom string reporter of my own and that used the old reporter and so it overwrote the library one

One fix is to sanitize the input in the library reporter

Thanks -- will be in next release.