You could make a sprite that's 2-3 times as big as the stage, and have a transparent circle around the center.

here's what I would do, oh, and warped_wart_wars also has a good way.
https://snap.berkeley.edu/snap/snap.html#present:Username=ego-lay_atman-bay&ProjectName=night%20effect

mine has a sprite that covers the whole stage, and another sprite which is a circle. In the circle sprite, I have this script 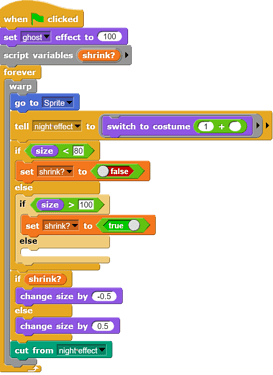 night effect script pic696×954 97.7 KB
first, it goes the the sprite, then it tells the black sprite to switch to the costume covering the stage, then it checks the size to make it either shrink or grow. After that, it changes the size. Then it just cuts itself from the black sprite, and since I set the ghost effect to 0, you can't see the circle sprite. I put it all in a warp block (inside the loop) so it looks like the circle is moving.
warped_wart_wars November 17, 2021, 3:36am #4

You can make the circle transparent around the edge by editing it, making it very small, and then making it about the same size it was originally.

BTW your way is better than mine.

I'm not sure what you're saying.

In the costume editor.

I now understand what you mean, and it does give off a great effect 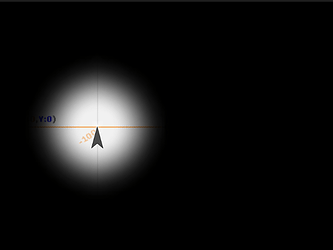 yeah, I'm just a fast typer so I may not have the best accuracy.

I'm also a fast (ish) typer. (Why doesn't my browser's spellchecker think "typer" is a word?)

it's not just your browsers spellcheck, mine says typer isn't a word too (until I clicked, add to dictionary)

well, it doesn't have to.

(the correct term is typist)

well, my script does follow a sprite. Just change the sprite it goes to at the beginning, to your player sprite.

(the correct term is typist)

Ok. I don't think I knew that until now.

I put it all in a warp block

It turns out it is not necessary to use the 'warp' block in your project; it will be as fast if the inner "if else" is replaced by the simple "if" statement.

it will be as fast if the inner "if else" is replaced by the simple "if" statement.

oh, lol, that makes sense. Snap doesn't have to check for an else statement so it's faster. It's weird how little things make a huge change.