After trying to save project got error message. Tried to "recover" and it still gave you an error code "Load fail type error cannot read properties of null reading width"

**What's problem you are encountering?**tried to save and tried to open project and got the error message above 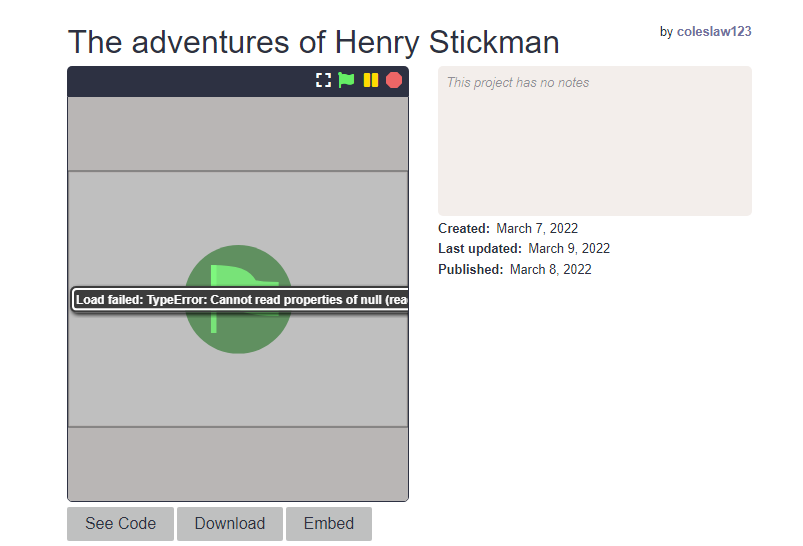 What have you tried that didn't work? tried to share and publish and have another person pull it up but still got the error

Post a project example, link, or screenshot: Snap! Build Your Own Blocks

hmm... looks like there's a bad costume in your project, but this shouldn't happen. I've salvaged your project here: Snap! Build Your Own Blocks

I have this problem with another student... Snap! Build Your Own Blocks
Same sort of message...imported image from internet but it was working fine after import but next day went to open and error message appeared.
I tried to attach image of error code put it won't allow me. It is the same error code as other student.

can you tell them to share that project, then I try to salvage it. Tnx

They should have shared it now.

Okay, they said they shared and published it now. Thank you for your patience

The project is indeed shared, but the reason it won't load (at least for me) is just a loading error.

I've salved it: Snap! Build Your Own Blocks

I'll deploy a little patch later that'll make sure this won't happen again, although it's not clear what's causing this (the patch will address the symptom of not loading, though)

One - unrelated - thing I noticed in the project is the use of generic WHEN hat blocks with switching to another scene:

I just want to point out that this might not be what the student intends to do, because it will always and repeatedly switch to the next scene. In effect the student will not be able to ever again switch to that scene, because the very second that scene gets activated it'll switch to the next one again, because that condition still holds true. Your student can still edit the scene by first stopping all scenes - which they can also do by holding down the shift key while pressing the red stop button - but it might be helpful to point out to them that such generic conditions might have logical consequences they didn't think of, and that in such cases a loop with an additional check might be the better implementation.

Good luck with the project and sorry for the Snap! hassle.

One more thing, @ego-lay_atman-bay and @warped_wart_wars , it's nice that you're trying to help, but really, if you're clueless please don't spam such threads with uninformed observations and musings, because I'm trying to help here. Gee, really folks, you don't have to leave your marks in every single thread, especially if you cannot help here. It's okay to not know things, and to let the pros handle it