Has it changed in recent years?
Background

So, recently I ended up deleting all my global variables and re-creating them to put them in a particular order and then my project went wrong

Eventually, I worked out that when a variable is created - its given value of 0

Did something change over last 3 years or did I just get it wrong when I wrote the code?

Or have a slipped into another multiverse (again)

Snap! inherits from JavaScript a terrible sloppiness about zero-ish values. So really the value was always 0, but it (I guess) used to be interpreted as the empty string instead of as a number.

I take this as a feature; it teaches programmers not to make assumptions about the initial values of variables, but always to initialize them explicitly. (Yes, I get it, that's what you were trying to do.) I tend to do IF (NOT (IS ___ A LIST ?))...

Well, I went back and ran 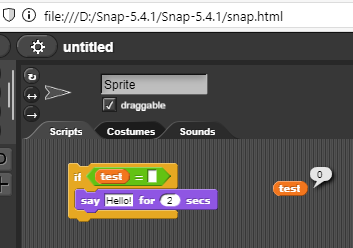 in 5.4.1 and it behaves exactly the same then as now

I must have just got it wrong (and never ended up testing it properly!)