Being able to drag things into the variable setter

With the normal variable setter block, you can't drag anything into the first dropdown (the one hosting the variable name), as shown above.

If you import the "create variables" library, you can do that. And when you do that, it reads the value of var (thing), and sets the variable with that name to the specified value on the right (in this case 0).

If the above statement is correct, I just want to know why you can't do that with the normal variable setter.
(On a side note, how did jens implement what's shown in the second picture?)

(Also forgive me if any of my assumptions are incorrect)

(On a side note, how did jens implement what's shown in the second picture?)

Ahaha yeah I learned, after making this topic, how to look into the inner workings of a block.. thanks for reminding me

I don't think this will be implemented... but you can always do

P.S you can use the hide variable & show variable to show & hide primitive blocks! like this: 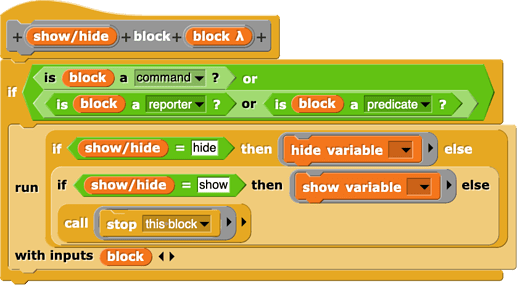 I just want to know why you can't do that with the normal variable setter.

Ah, ok. I can see that being confusing.
I didn't feel like this sort of question would be fit for, say, help with snap (as the description for that one says "need help with your project?" which isn't what I was looking for), so I kinda morphed it into a suggestion.. maybe I'm wrong in doing that :P

Seems like a good feature and I'm glad you guys at least kept it in the "create variables" library.

I'm glad you guys at least kept it in the "create variables" library.

Early warning: Jens keeps threatening to remove that library because he says people who use it should be using association lists (a/k/a dictionaries) instead.

does that not help?