So here is my 3D Pointer I made using stamping:
Here is the link
I knew how to do this because i have lots of experience from scratch

I wonder if it could be done by having a bunch of clones that inherit direction and x position, but each controls its own y position...

That sounds good, i'll try it since when creating a variable, if you set it to this sprite only it also sets it as a thing like "for this clone only"

Hi again. I did the same with clones all with its own y value https://cloud.snap.berkeley.edu/site/project?user=mesyeti&project=Clone%203D

Ah. You don't have to use variables; most sprite attributes are inheritable. Like this: 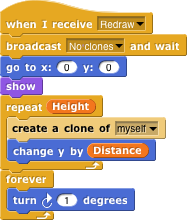 Here's the project: https://cloud.snap.berkeley.edu/snap/snap.html#present:Username=bh&ProjectName=Clone%203D
By the way, I call to your attention the "text costumes" library, for making prettier buttons.

P.S. I hope you don't feel I'm raining on your parade. You invented the logic of the program; I just eliminated some code by taking advantage of a feature you didn't know about. (I'm a teacher; it's hard for me not to teach. :/)

Thanks so much, I had no idea what the inherit block does.

Ah, great! See, that's doing Snap!pish things in Snap! instead of rewriting it. :~)

the project is great, I don't think I could have done it.

Well, isn't that the point of remixing? It's how you learn from each other.

There's an interesting difference in your inheritance version: If you drag the sprites apart, they rotate in their new location, but they snap back to 0,0 in the original version. I infer that dragging the sprite somewhat disconnects its inheritance of the x pos.

Moving a sprite does disconnect one (if you move strictly vertically or horizontally) or both of x position and y position, yes. But you can't break a nesting relationship that way; the part sprite will stay in its new relative position and (if not hanging) direction, relative to its anchor sprite.